Moonshot - The Next Giant Leap

Game Shuttle Labs developed Moonshot to celebrate the 50th anniversary of the Moon landing. By pre-ordering our board game on Kickstarter in July, you can relive one of the most complex and epic feats of humankind on your own table. Try the game out live at limited events with pre-registration.

Moonshot - The Next Giant Leap

Two teams of players take on the roles of two Space Programs (NASA, RosCosmos) in the Cold War space race, competing to be the first to deploy their nations' (USA, CCCP/USSR) astronauts to the Moon. Both Space Program teams consist of a Politician and an Engineer who need to cooperate to win. 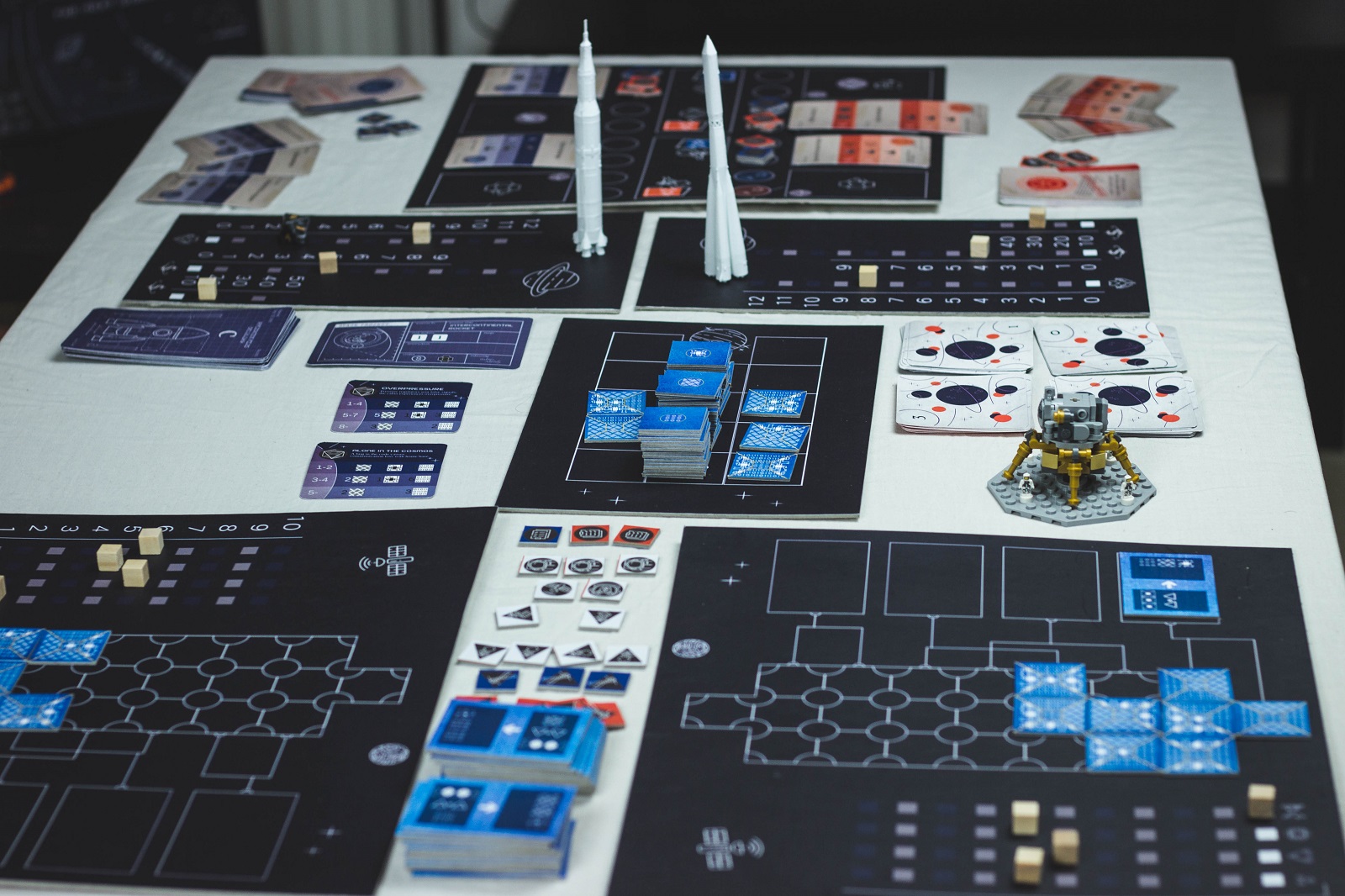 Goal of the Game

The first team to complete a successful Moon landing mission wins the game. The game also ends if the budget or popularity of a team falls below the level indicated on the board, resulting in a win for the other team.

You can play the base game with 2 or 4 players (a separate rulebook will be provided for games with 2–6 players). When playing with 4 players, you play in teams of 2: one team member selecting the Politician role, the other one selecting Engineer. With 2 players, Moonshot is a 1 vs. 1 experience where each player takes on both roles.
The game is played in rounds until one of the end game conditions is met (successful Moon landing mission, critical budget or popularity loss). A game round has four consecutive phases (A , B, C, D).The first phase (1), strategic discussion, is only used with 4 players. Teams have two minutes to discuss their strategy for the current round; use any timer.
In the second phase (2), the two roles act at the same time, i.e. the roles play actions simultaneously. Engineers spend money to develop their rocket blueprints or do testing on possible risks during launch. Meanwhile, Politicians use their influence to support their Space Program and prevent the opponent from achieving their goals.In the third phase (3), players follow the rocket launches and the results of the missions.
‍In the fourth phase (4), players do end-of-round administration: Politicians evaluate their actions and players determine the resources available for the next round.

Put the two Level 0 Missions between the two teams and place two randomly chosen Level 0 Risk Cards next to them.
Start tracking the budget and popularity for each Space Program.The Space Program Budget has no limits and starts at 30 , while Popularity moves on a scale of 1 to 12, starting from 10.
If either team’s popularity decreases to 0, they lose the game. If the difference between the two teams’ budgets is at least 15, the team with the bigger budget wins the game.
Place the different tokens—Testing, Spies, etc.—within reach on the table. Prepare the Mission and Risk decks by shuffling them and placing the decks on their designated spaces.
Politician players should face each other on opposite sides of the politics board; at setup they shuffle their Maneuver decks, draw four cards, then collect their own Influence and Bluff tokens.
Give 30 money each to the Engineers.
The two Engineers also face each other on opposite sides of the table with the Research Center between them: this part of the board shows how much their Technology Tiles cost and how they can be acquired. On one side of the Research Center, form a deck from the shuffled Module tiles and place four of them face-up in the designated places. Add two more Modules randomly to the last position of the two Engineer Suppliers lines. Shuffle the Technology Tiles by type (Structure, Electronics, Code) and form three decks on the other side of the Research Center. Put one Tile from each Technology deck into the Engineers’ Development line. The two Engineers examine the Rocket Blueprint and the Rocket Parameters sections on the board. Set the values of the Rocket Parameters to 0.
Give the First Player Marker to the CCCP/USSR Politician.

Teams have two minutes to openly discuss their strategy for the current round. Topics can include which Maneuver Cards the Politician will use and where, which mission is achievable, etc. Communication is NOT restricted in later phases.

(in two player games, start with the Politician Actions and proceed to the Engineers after deciding about the launches)

2.1) Preparations subphase
Both Politicians receive four Influence and four Bluff tokens. The player with the First Player Marker gets +1 Bluff token and starts the round.Beginning with the First Player, the Politicians alternate either placing Maneuver Cards on one position on the Politics section or passing. If one player passes and the next player plays a card, the player who had previously passed is allowed to play a card in response. Once both players pass consecutively, this subphase ends.

2.2) Actions subphase
Starting with the First Player, Politicians alternate turns by taking one Action selected from below:

Engineers simultaneously take as many Actions from below as they want, but they must always be able to pay their respective Action Cost first and finish one Action before starting another.

To utilize Political Opportunities, yell ‘STOP,’ let the other Engineer finish their current Action, then execute one of the following Actions:

When an Engineer does not want to or is unable to take further Actions in the round, they yell ‘PASS.’

Game concepts for the B) phase 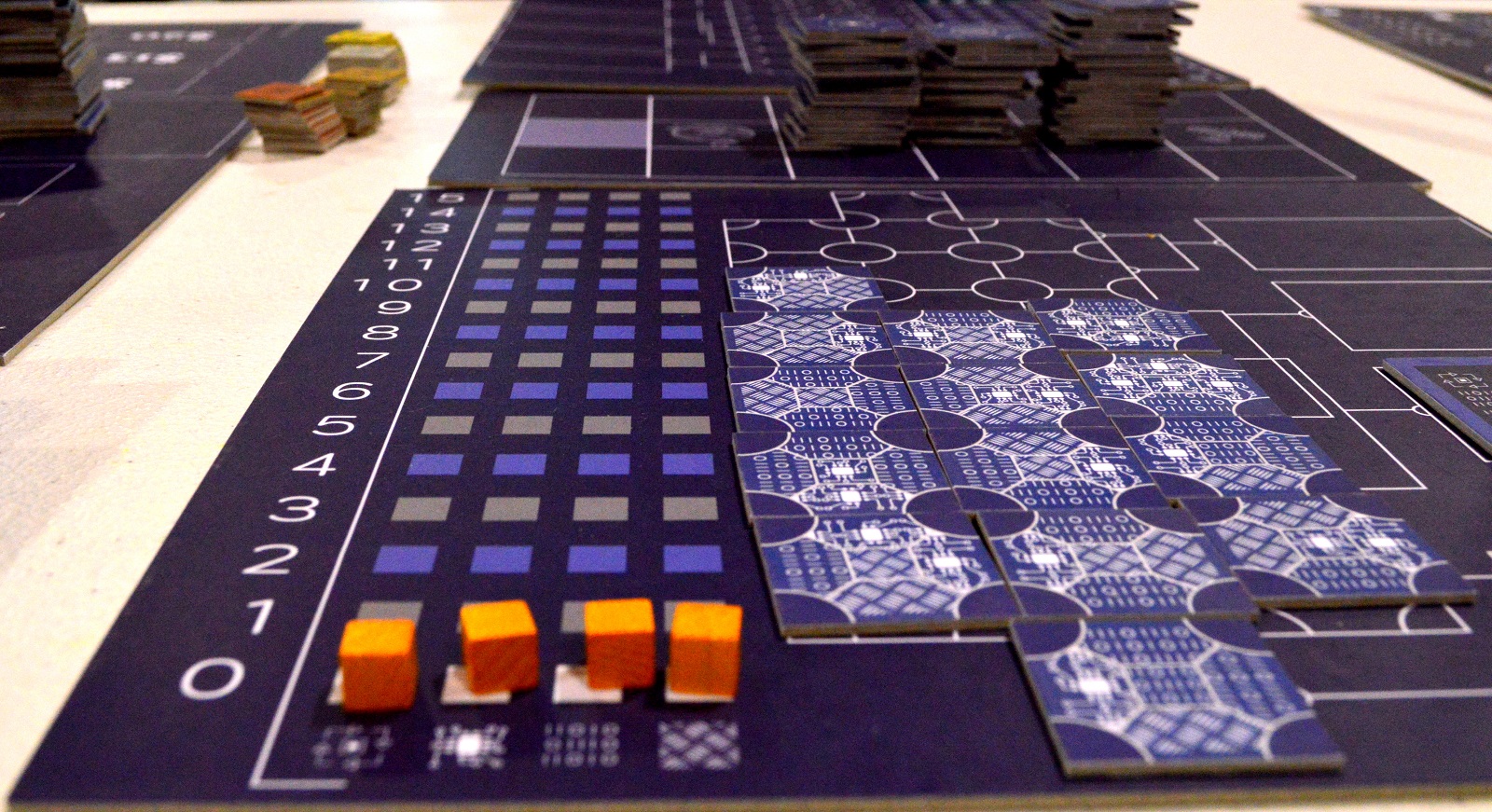 The Rocket Blueprint also has places to install Modules. Modules give you conditions for one or two rows (or a column containing three spaces), which, when fulfilled, give you different bonuses that should be registered by changing the values of the Rocket Parameters. When a new Module is acquired, it must be placed in an empty space or on an existing Module (in which case the existing Module must be discarded). Modules can give a Rocket Blueprint Adaptivity which gives the Engineer extra “wild” values that they can divide freely between icons before each launch. 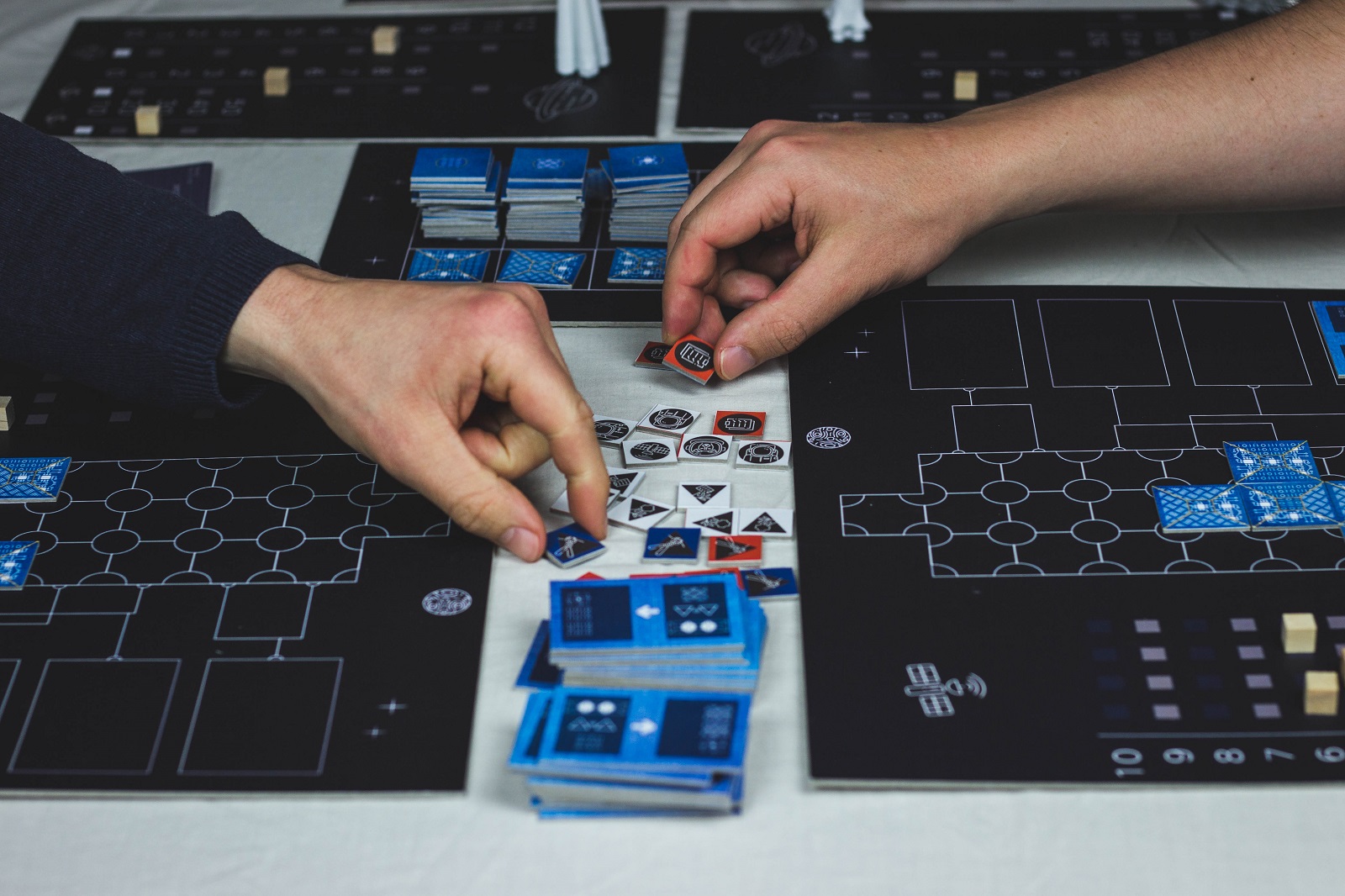 Engineers can run tests on hazards (shown on the Risk Cards) that can occur during Missions to ensure that no element in the rocket system is causing a malfunction.Each time you test a Risk, place one Test token on it. Each Test token on that particular Risk adds 2 to the result of a roll with the Risk Die.The Risk level is determined by rolling the 8-sided Risk Die. The higher the rolled result, the easier the Risk becomes, so you will improve your chances even if you only test once. Example: If there is a Test token on the Risk Card and you roll a 6, then the Parameter Check Value is 8.

Politicians play their cards in the Politics Board. They can place their cards in four different places with each empty place having a different effect. These effects are categorized into three categories, depending on when they are rewarded: 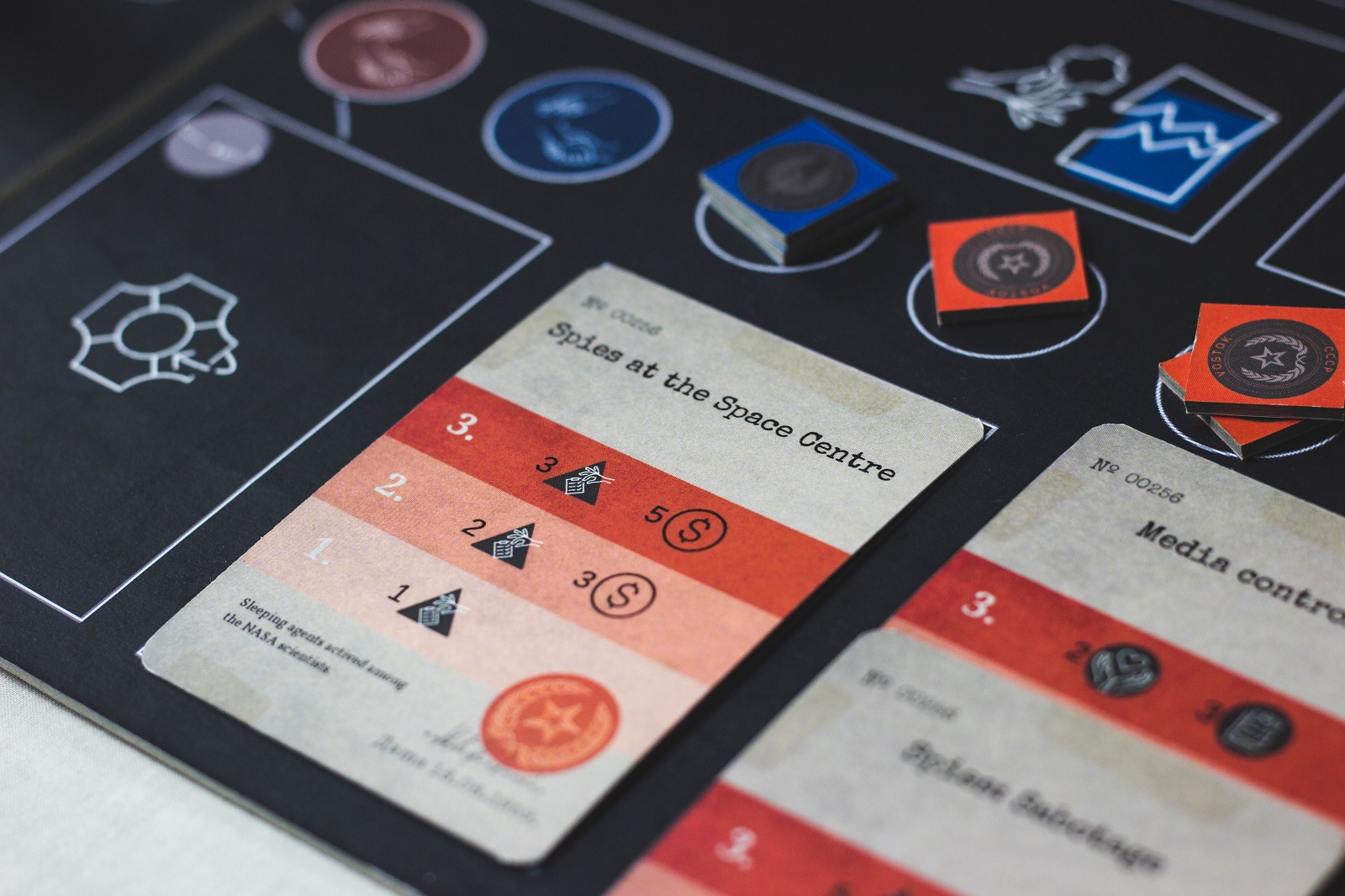 The iconography on the Maneuver Cards explicitly tells you what bonuses you will be given when you evaluate and win the Maneuver on a given level.

We send it to you and you can read it later:

Launches must be resolved in the order of the announcements. Before launch, check if the payload required for the mission is on the rocket. If not, delay the launch (-3 popularity).
‍
The participating team’s Rocket miniature will either move to the next Risk if the current Risk was completed successfully or explode in case of an unsuccessful parameter check.
‍
If both Space Programs announce a Launch on the same Mission and the first team successfully completes it, the second Space Program must delay the launch (-3 popularity)
‍
After each launch, the teams will immediately receive their reward for the accomplished Mission or experience popularity loss for the exploded rocket.

Game concepts for the rocket launches

Mission Cards include Payload Requirements (eg. satellite, astronaut). If the Rocket has the appropriate payload and meets the Risks marked on the Path, the Space Program will be rewarded. The reward is determined by the Mission Card. When announcing a Mission, place the appropriate level of Risks next to it, face up. 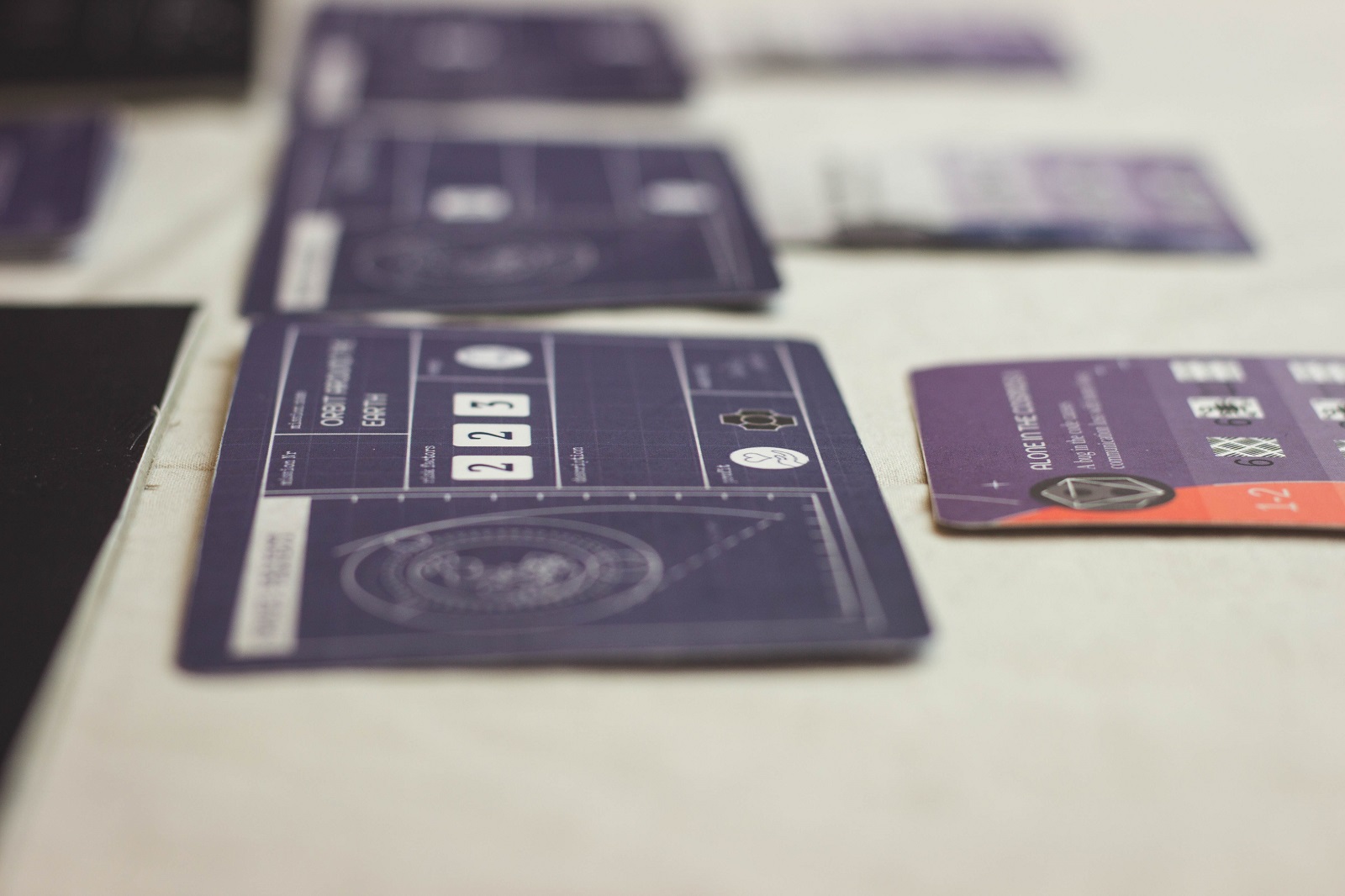 The Risk Cards are placed next to the announced Mission Cards in the amount indicated on the Mission Card, face up.
Each Risk Card indicates a technical error that can be solved or made less likely by testing. It also has three ranges, each listing the minimum parameters that are needed for the Rocket to remain functional.
Testing on the Risk adds 2 to the result of a roll with the Risk Die.
In the case of sabotage, the value on the die is reduced by X where X is the number of Sabotage tokens on the Rocket Blueprint. If the value rolled with the die is 0 or negative after factoring in sabotage (before counting tests), the Rocket explodes immediately. 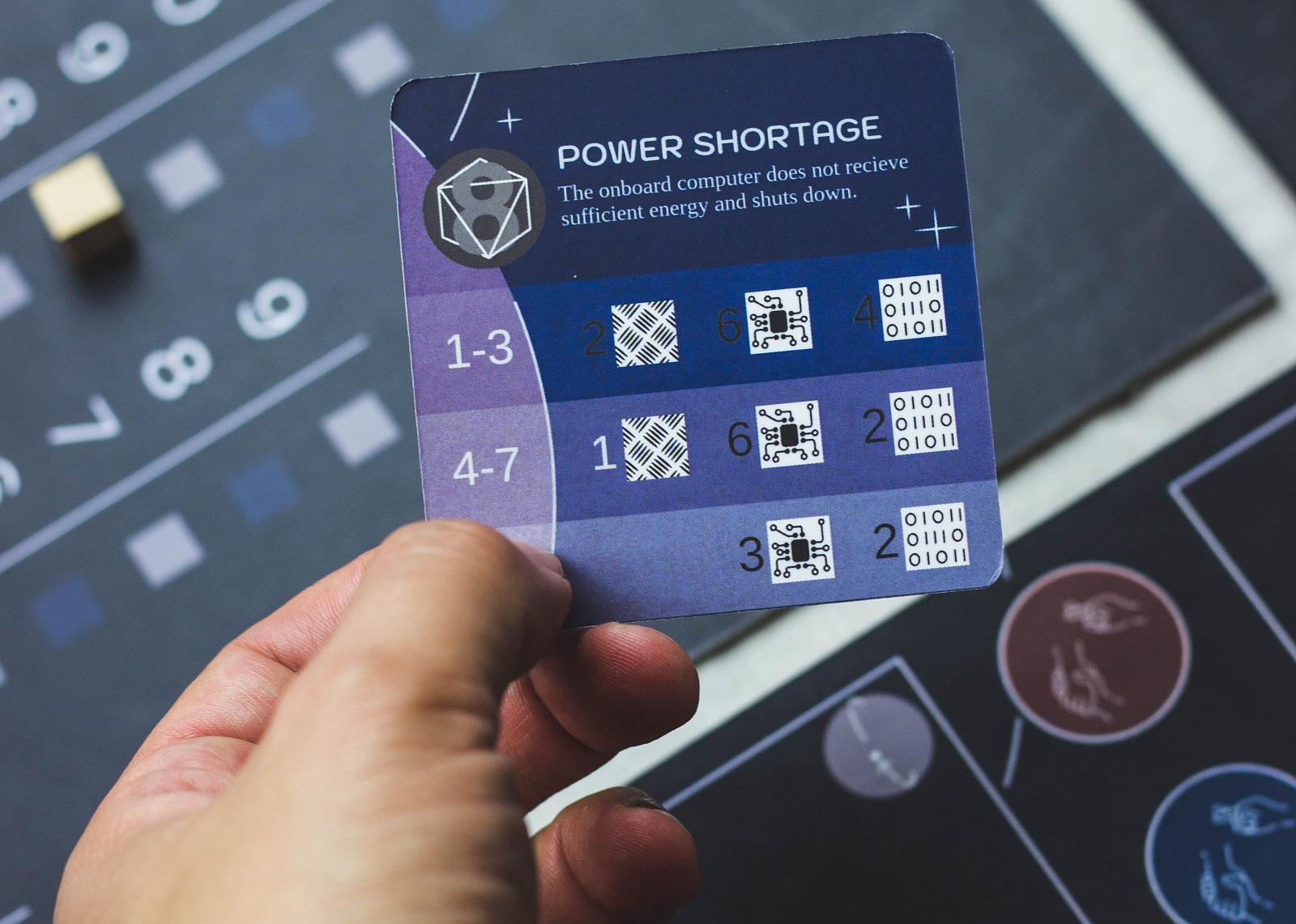 The game has an 8 sided die referred to as the Risk Die.

After the Launch, the Rocket is exposed to various dangers and risks. Risk Cards must be eliminated in order. To eliminate the Risk, roll the Risk die, add in any Testing bonuses, and compare the resulting value to the Risk level table. The Rocket will fulfill the conditions if the values of the Rocket Parameters are greater than or equal to the value for the appropriate level of risk indicated in the table.
If the Risk is eliminated, continue with the next Risk Card until all Risks are eliminated and the mission is  a success (Spacewalk, Attempt at Docking, Moon landing etc.) or the rocket is destroyed.

An exploded Rocket does not only cause material damage: if carrying astronauts, the Space Program loses popularity.

*(because the teams raced for the same mission and the first one succeeded, or because no necessary payload present)

4) End of round administration

4.1 The Budget of the Nations decreases by 3 at the end of each round.

4.3 The Politicians, starting with the First Player, decide the fate of their own Maneuver Cards. They can choose from the following:

4.4 The Popularity and Budget Changes received as a result of the Maneuvers are immediately recorded and the Engineer receives any extra resources - money, Tech Tiles, tokens, etc.

4.5 Discard every evaluated Maneuver Card (together with the cards used for their potential escalation) and unused Bluff or Influence Markers.

4.6 The Politician’s hand size is four; at the end of each round, they draw Maneuver Cards from their decks until they have four cards in their hands again. If there are not enough cards in the deck, the discarded cards should be shuffled in.

4.7 The Engineers receive money equal to their current budget.

4.8 The First Player marker shifts to the other team.

4.9 Continue with the next round until an endgame condition is met.

Continue with the next round until an endgame condition is met.

1) Strategic discussion: Teams have two minutes to discuss their strategy for the current turn.

Always choose and execute one action in full at a time (simultaneously with the other Engineer):

When an Engineer is finished with their actions, they yell PASS.

Launch rockets in announcement order and follow their path, one launch at a time. Politician rolls the Risk Die.

4) End of round administration

We are eager for your feedback!

Write us
We are using cookies to give you the best experience to interact with our products. By clicking 'Accept' you accept these cookies.
Accept